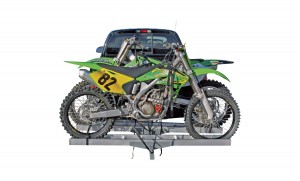 The plentitude of hitch-mounted motorcycle carriers available can be a bit perplexing when you first start looking. This is simply because there are so many variations on the theme; so many different capacities and designs. Rage Powersports is no rookie in this industry and has a respectable collection of its own. One of the models which grabs plenty of attention, especially from those who rarely ride alone, is the AMC 600-2 Double Motorcycle Hitch Carrier. 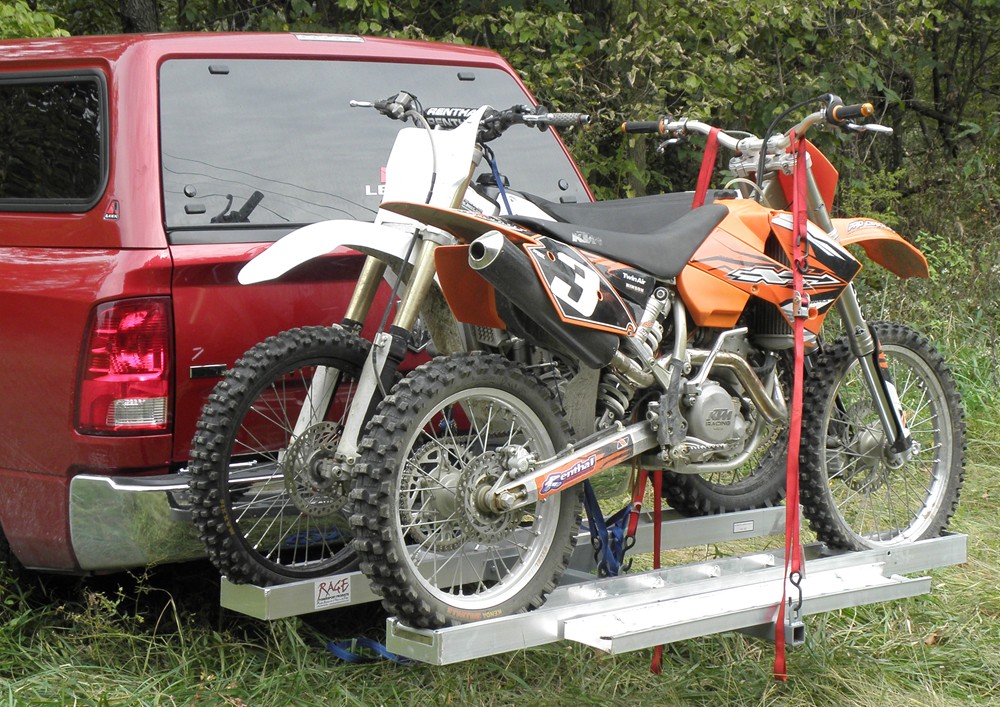 Rage’s AMC 600-2 double carrier does indeed carry two motorcycles at one time on the hitch of a single tow vehicle, something only large trucks and trailers could do before. It manages to do this with a heavy-duty aircraft aluminum deck, meaning it is very lightweight compared to steel models with the side benefit of being virtually rust-proof and very durable, which is welded to a very strong steel main hitch tube that is powdercoated for the same reasons. Though each rail is 75 inches (1.9 meter) long, the entire unit only tips the scales at 69 pounds (31 kg) and yet it can haul 600 of those same pounds (272 kg); that is more than enough for two big motocross machines in the 450 cc range, even older models. In fact, one of the rails can hold 400 pounds (181 kg) if you are only taking one motorbike along. As is standard with this weight class, you will need a basically ubiquitous two-inch Class III hitch or better and the 45.5 inch (1.2 meter) ramp actually stores right up next to this area to keep as much of the weight forward on the AMC 600-2 as possible.

Simply plug your AMC 600-2 Double motorcycle carrier into your tow vehicle and install the ramp on the rail of choice – the closest rail to the vehicle should be loaded first – and it is ready to go. Loading is as simple as pushing the bike up the ramp and into the wheel wells and then using tie-downs to secure it in place. For the second machine, simply repeat the process and then store the ramp. It is actually quite an interesting feeling driving down the highway with one of these as the carrier does extend somewhat from the rear of the tow vehicle; be prepared for some strange sensations if you have never had something this heavy and long hanging off your rear-end. However, in practice, once used to the feeling, it is still far better than dealing with a trailer and the associated complications. Unloading the AMC 600-2 double motorcycle hitch carrier is just like any other hitch carrier – quick and simple as long as you can keep your balance and you have some upper-body strength.

The AMC 600-2 double motorcycle hitch carrier already has an advantage over many in this sector of the market because it is capable of carrying two dirt bikes. This gives it a real benefit to those without any other way to bring two bikes along with them, but it also has the disadvantage of being rather large. That means you need to be sure that your tow vehicle is up to the task, so check all weights and specifications before you make the purchase.

Rage Powersports has a best seller with the AMC 600-2, and any trip to a local dirt track will demonstrate this. One major reason for this is that the suggested retail for this carrier is only US$330, but it is easy to find for as little as $240 – and it carries TWO dirt bikes! A well-built, durable, and incredibly useful motorcycle transport method – it’s hard to beat the AMC 600-2 double motorcycle hitch carrier.